Back in 2011 Polly and Liz were in training for the Bath Half marathon – definitely a mid-life crisis – and during conversation they talked about the slowly crumbling Wookey Church Hall. Brainstorming about what could be done to raise money for its refurbishment, Liz suggested a village pantomime like they did in the 1980’s.

The momentum from the very start was amazing: someone knew someone in the village – Pauline – who wrote short stories, and she agreed to write a version of Cinderella. Jane was great at sewing, so she was asked to be in charge of costumes, which she has been ever since. Set proved to be a bit of a problem, so they asked Lara because she was really ‘arty’! This was such a big task that Lara approached Tony, a local retired set designer (what are the chances?!) to help her. Tony then asked if we’d like photos of the production as his wife Myrtle was a very keen (and excellent) photographer. The music was another problem, so they asked John (who was ‘good with words’) if he could change a few lyrics to some songs to give them a more local flavour.

Audition posters went up around the village with the hope that someone would turn up. And they did – 22 adults and children.

Having asked if any members of the local choir if anyone would like to be involved, Ann said she’d like to ‘do something’ back stage and has stage-managed every production since. Gay also volunteered to help and has taken on many onerous tasks from prompt to helping with the costumes and most importantly making endless cups of tea!

Rehearsals started in the damp, smelly Church Hall – many song lyrics referred to this unique aroma! The team soon realised that they needed lighting and staging, and someone said “why don’t you ask Ted? “. Ted had been in charge of the lighting for the pantos back in the 1980’s and was apparently waiting to be asked to help – and this completed the team and brought the whole production together.

Polly, the group’s Director, recalls: “I can clearly remember our first ever night opening to a full house, with Liz and I sitting together clasping each other’s hands, feeling sick with nerves. Then the audience started to laugh and we said ‘it’s funny, they’re laughing, it really is funny’!”

The first production was a big success and so feeling spurred on the team decided to stage a summer youth production of Joseph and the Amazing Technicolor Dreamcoat. They’ve never looked back and every year have either produced a pantomime in January or a musical ( Wizard of Oz ), and after two more youth productions in the summer months ( Bugsy Malone and Jungle Book ) decided to let the adults have a go and they performed a comedy play – Inspector Drake’s Last Case in May 2017.

There have been a few changes since Wookey Theatre Group started. Liz decided to take a step back in 2013 and Ann has been the groups Producer ever since.  Very sadly their fabulous set designer Tony passed away, but before he did, he lined up another local retired set designer, Brian ( again, what are the chances?) to take over, and what an amazing job he has done.

Greg  joined the group in 2016 when he helped direct a mini film for Wizard of Oz. Since then he has provided much needed lighting, technical and sound support. In 2022 he directed a mini film that was so professionally produced it will forever be remembered as one of the key highlights in Vicar of Dibley.

With the group’s shows becoming ever more popular and the demand for tickets growing Polly and Ann decided to launch a new website in 2018 to help promote their shows and to move ticket purchasing online.

Polly says: “I quite often speak to other local theatre companies who struggle to get support, this just reminds me how lucky we are in our little village to have such an amazing array of talent. An audience member once said something that really resonated…’ as soon as you walk in there is such a strong sense of community and warmth’.

‘It’s not just people from within the village that have supported us, right from the outset Walton Press has recognised the work that we do and has sponsored every show by printing all our scripts, tickets, posters and programs, it all makes such a difference.’ “

As a theatre group we have raised over £25,000 towards Wookey Church Hall refurbishment project, which was why it all began. And we have no intention of stopping……..

2013       Joseph and his Amazing Technicolor Dreamcoat

On 3rd December 2015 the Production Team were invited to the Pride of Somerset Awards ceremony at Rookery Manor. Wookey Youth Theatre had been nominated for Outstanding Contribution to The Arts and Culture. The other nominees were Farmfestival and Wedmore Opera both well established, highly respected groups. As a small community theatre that had only been running for a few years and against such strong opposition, it was with genuine surprise that Wookey Theatre Group was called out as the winner.

As a local village theatre group our goal is to put on good quality, fun and laughter packed performances, full of music and dance. We are tremendously proud of the strong sense of community that magically occurs through each and every performance. 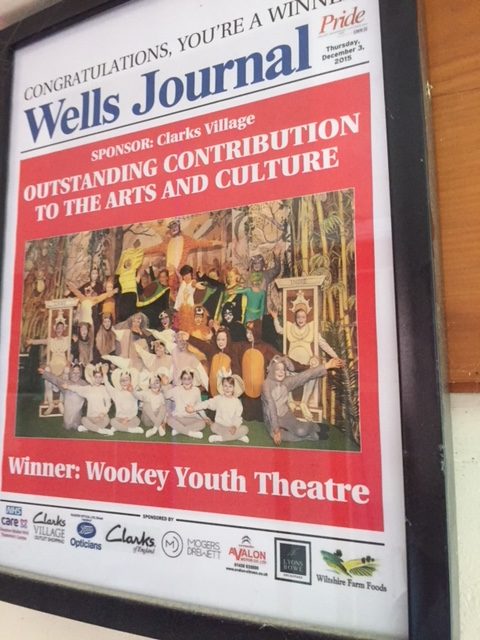