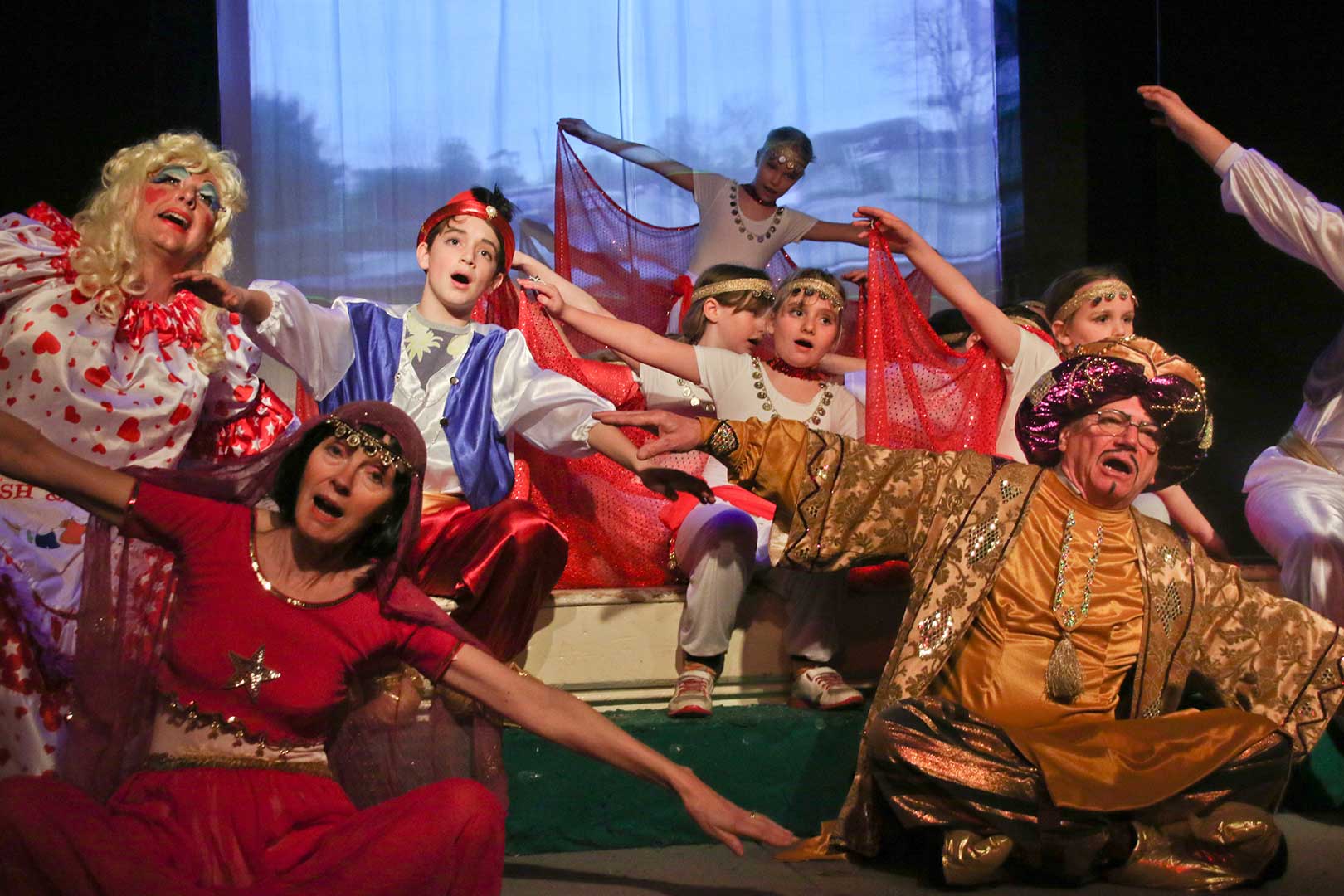 Spirit of the Ring – James Frost

All round help – Pete Tincknell

Tickets for this year’s Wookey panto sold out faster than Glastonbury Festival. Wookey church hall was filled with adults and children on Sunday, 22 January for the opening performance of Aladdin, the first of six held over the week.

The show opened with the dramatic entrance of evil magician Abanazer, who sets out to enlist Aladdin’s help in bringing him the magic lamp of Henton. From the minute Abanazer (Steve Collinson) strode onto the stage he made it his own, cue much booing and hissing.

Abanazer arrives at the Wookey launderette, where Aladdin and his younger brother live with their mum, Widow Twanky. Steve French was superb as dame Widow Twanky, putting double entendre and enormous blue false eyelashes to good use, in a very funny performance. Ryan Cooper exuded laid back cool as the lazy Aladdin with the hots for Princess Jasmine and Jack Carroll shone as Aladdin’s brother Wishee Washee.

Aladdin heads for the palace to try and catch a glimpse of the princess and nearly ends up getting caught by the police who think he is a thief. Princess Jasmine (played beautifully by Victoria Wakeling) takes a shine to Aladdin and helps to hide him, assisted by her loyal handmaiden Suki (Rosie Winstone) who delivers some great one-liners.

They give the police the slip but not for long. Aladdin gets arrested and his only hope appears to be arch baddie Abanazer who wants him released for his own ends. Abanazer persuades Princess Jasmine’s parents, the Emperor (Gil Oliphant) and Empress (Louise Cooper) – who make a great comedy duo – to release Aladdin but promises to dispose of him.

Abanazer rescues Aladdin only to leave him stranded in Wookey Hole Caves after he refuses to hand over the lamp. The moment Abanazer surprises the audience by shedding his cloak to reveal a skin tight, red Morphsuit and lead a tongue in cheek rendition of Britney Spears’ Oops! I did it again will go down in Wookey panto history.

Pete Tincknell was pure genius as the Genie of the Lamp. When Aladdin suggests, “Genie can build a big palace for us all to live in”, his sudden change from camp genie to gruff Somerset to reply: “Providing we get planning permission. You know what the local council’s like around here”, got a huge laugh.

The younger members of the cast were excellent. The enthusiasm of the chorus was infectious during the song and dance routines and the police (ten and under) were great, delivering their lines with just the right amount of cheek and irony.

James Frost’s command of the stage was magnificent as the Spirit of the Ring, winning him huge laughs with the raise of an eyebrow and Abominable Snowman (Emily Waterfield) had perfect comic timing. She had the audience “behind her” all the way.

John Carroll’s lyrics and music and fantastic performances by the whole cast combined to make Aladdin another legendary panto from Wookey Theatre Group. The magic carpet ride to Shepton Mallet was an innovative surprise, with film used to great effect. The stunning set was designed by Brian Wyatt and constructed by Bryan Wyatt and Ted Jenkins, and the colourful costumes were the work of wardrobe mistress Jane Casey.

Wookey Theatre Group’s production of Aladdin was directed by Polly Carroll and produced by Ann Gouldney. More than £2500 was raised from the panto and the money will go towards Wookey church hall refurbishments.