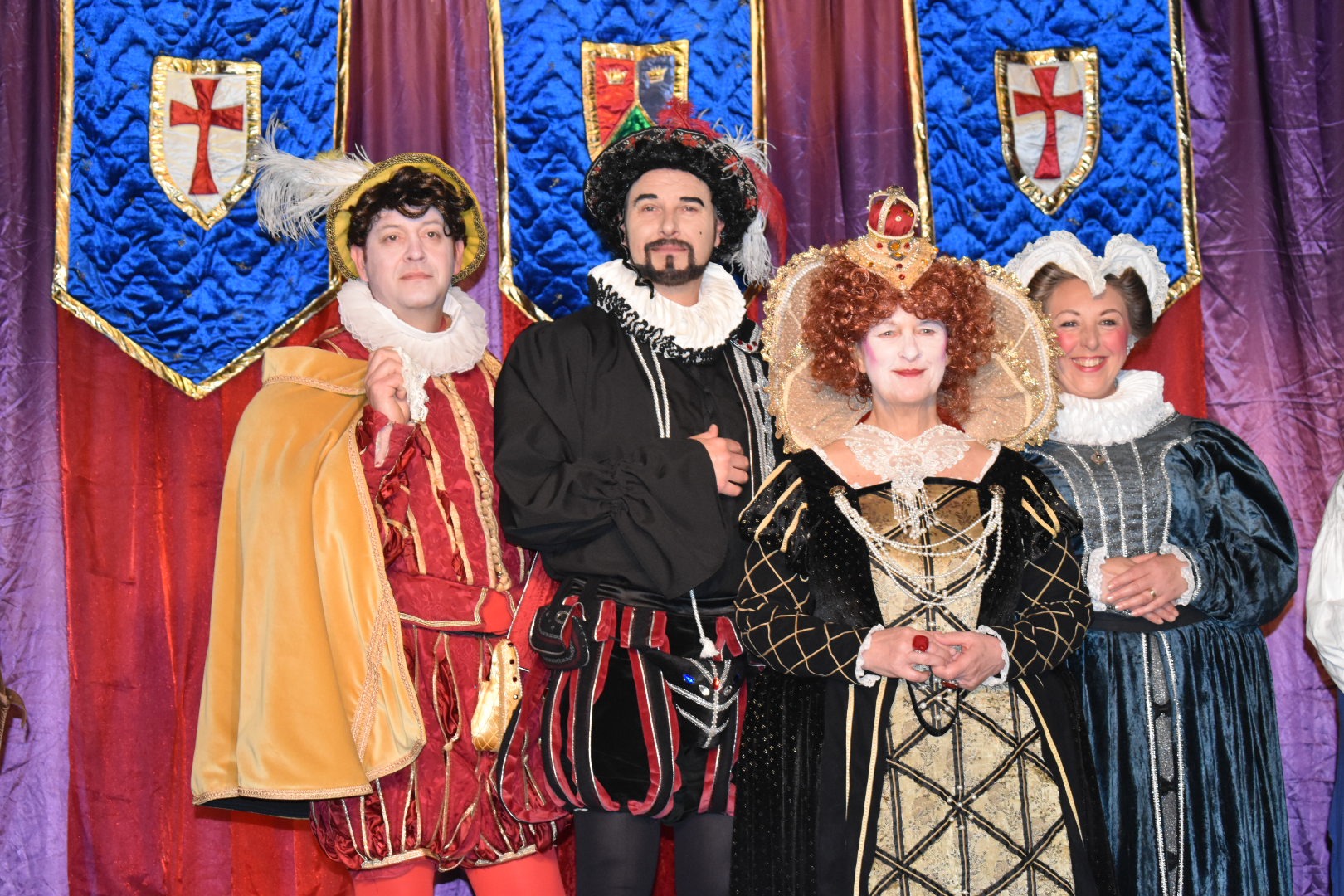 The award winning theatre group performed three episodes of the 19810’s BBC TV comedy at Wookey Church Hall. Tickets sold out and the opening night could not have gone better.

The curtain went up on ‘Bells’. In this episode a young woman masquerading as a boy becomes Lord Blackadder’s new manservant. She has set out to seek her fortune after ignoring her destitute and degenerate father’s pleas to ‘go on the game’. Bob Green was excellent as Kate’s straight talking father. ‘Kate for the final time, your mother is not dead. She’s run off with your uncle Henry’. Kate (a steadfastly disbelieving Louise Cooper) takes no notice: ‘Dear father, I know you only say such things to comfort me’.

Steve French stepped into Rowan Atkinson’s shoes with ease and they fitted perfectly. He was brilliant as Blackadder, with all the right mannerisms and an air of weary disdain mixed with exasperation. Casting aside his longsuffering manservant Baldrick without a qualm, he begins to fall in love with ‘Bob’. Gil Oliphant played the unfortunate Baldrick to perfection. The scene where Blackadder tries to teach him to count to four was unforgettably funny.

There were very talented performances from all the female members of the cast. Fen Williams was a scream as Nursey and Laura Pearcey was hilarious in each of her roles, moving with ease between Blackadder’s rival Lord Melchett, Jailor Mrs Ploppy and the superbly silly Torturer.

Queenie (Lyn Hinde) was magnificent as the dangerously childish Queen Elizabeth I, whose answer to the dilemma of whether to rescue Blackadder or Melchett from Kidnapper Prince Ludwig is to ‘throw a party’.

In Bells, Blackadder finally gives in and allows dimwit dandy Percy (very well portrayed by Andy Childs) to be the best man at his wedding to Kate/Bob, who reveals her true identity. But Pete Tincknell bursts onto the stage with a bang as Lord Flashheart, Blackadder’s old chum and first choice as best man (Rik Mayall in the TV series). Pete Tincknell had the audience roaring with laughter as Flashheart but also as Dr Leech and the Wisewoman.

A small cast adeptly played many characters between them. It was a highly professional and entertaining production, with outstanding performances all round. The TV series is deservedly iconic and hard to upstage but Wookey Theatre Group more than pulled it off. The script and characters created by Richard Curtis and Ben Elton stand the test of time and were given an affectionately faithful but fresh lease of life.

Blackadder was directed by Polly Carroll and produced by Ann Gouldney.