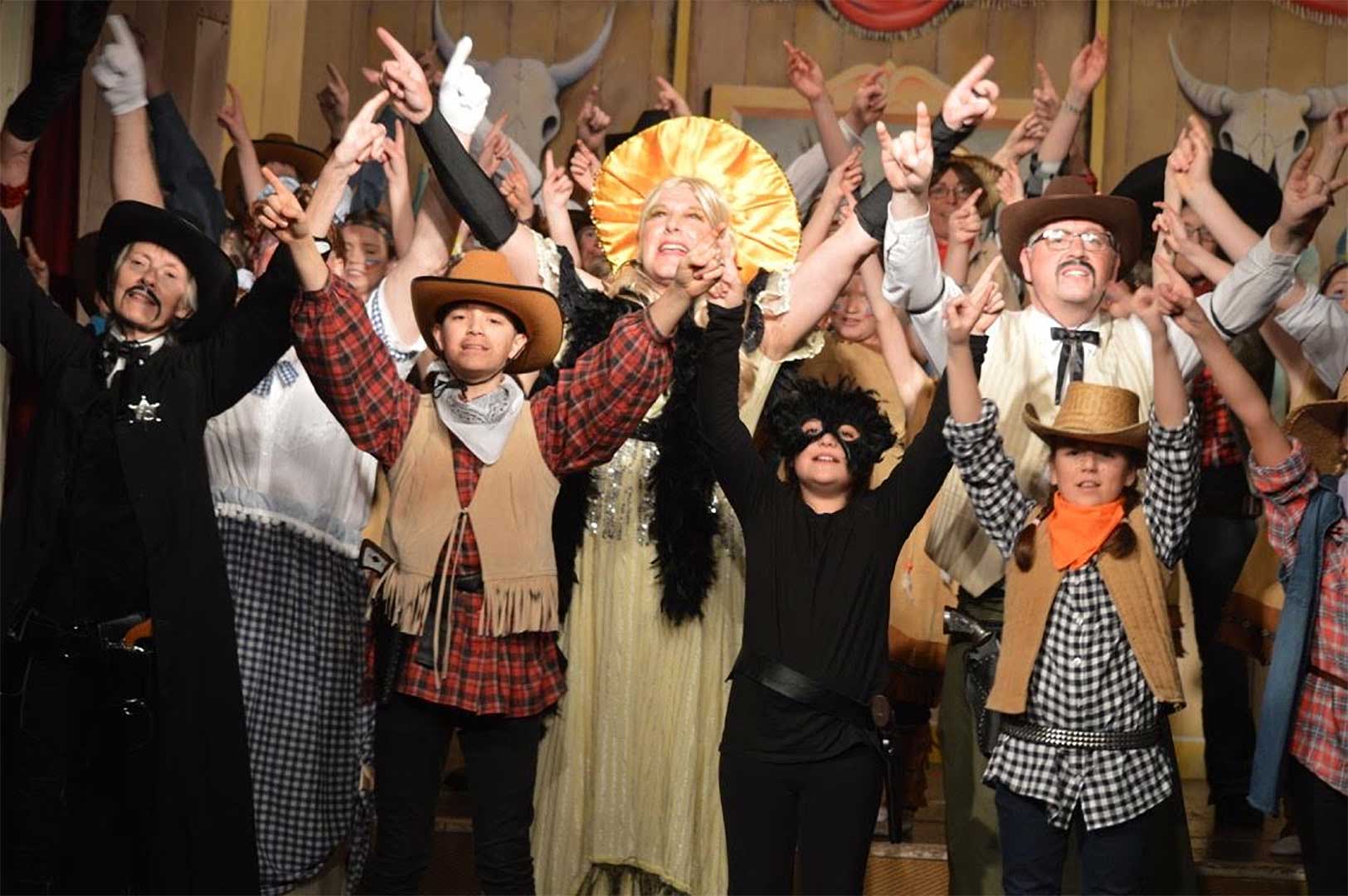 All Round Help – Pete Tincknell

Wookey Theatre Group brought the Wild West to Wookey with a big show that packed a punch. The moment they burst onto the stage at Wookey Church Hall with Go West, the cast of Calamity Wayne wowed a full house with a spectacular opening musical number.

We first meet Butch (Jack Carroll) and the One Dance Kid (Louise Cooper, dad dancer supreme) at the Ringers Saloon where they are getting ready for the Hootin’ Tootin’ Hoedown. Enter the Yarley Hill Mob and Scary Mary ‘the brains behind the entire outfit’. Steve Collinson rocked the Amy Winehouse look as Scary Mary, giving a towering performance which won him lots of laughs and even requests for his autograph. Just in case anyone had lost the plot Scary Mary hosts a quiz, “What in tarnation’s going on?” half way through to keep us on track. The baddie we loved to boo turned out to be not so bad after all when the Mole of Wookey Hole (played with poise by young Tilly Bowen) is revealed as the real villain of the piece.

Pete Tincknell was absolutely brilliant as Katie, a dame worthy of fame, who is persuaded to impersonate Kylie Minogue. His rendition of Can’t Get You Out Of My Head, clad in a revealing white jumpsuit, will long be remembered in the Ring O’ Bells and his romance scenes with Danny Martingale (Andy Childs) are no doubt the talk of the Wookey Hub.

Katie and Squawking Sue (played superbly by Imogen Crees) give Calamity a makeover – a man playing a woman, dressed as a man, getting dressed up as a woman. Steve French somehow managed to pull this off, while singing a revamped version of Dude Looks Like a Lady with Katie: “You might wonder why we’re grinning, because we’re always dressed up as women. I spoke to my wife just the other night, she said she don’t mind but all her clothes are too tight!”. He was excellent as the indignant and flustered Calamity: “You’re not getting me all dolled up like some pantomime dame. Forget it.”

Hillbillies Henton Hank (Liz Owen) and Little Big Hat (Di Harris) had the audience roaring with laughter, as did Wild Bill (Ryan Cooper) who did a star turn as the Sugar Plum Fairy. Billybob (Emily Waterfield) and Jimbob (Isaac Talbot, the youngest member of the cast) played their parts magnificently and saloon owner Norris Day (James Frost) showed an assurance beyond his years.

The songs included heart stopping solos from Boris Day (Victoria Wakeling) and Jack Carroll (Butch) in Don’t Stop Believin’. Scary Mary and the whole cast belting out Saturday Night’s Alright for Fighting was fantastic. They finished the show on a high with Crazy Nights, receiving a standing ovation.

Great acting, singing, dancing, comedy, a quiz, three dames and a chase scene – what more could you want? Calamity Wayne was another triumph from director Polly Carroll, producer Ann Gouldney, scriptwriter Paula Williams and the rest of the team. Wardrobe mistress Jane Casey deserves a special mention for the fabulous costumes, as does Brian Wyatt (set design and construction) and Ted Jenkins (set construction and lights).