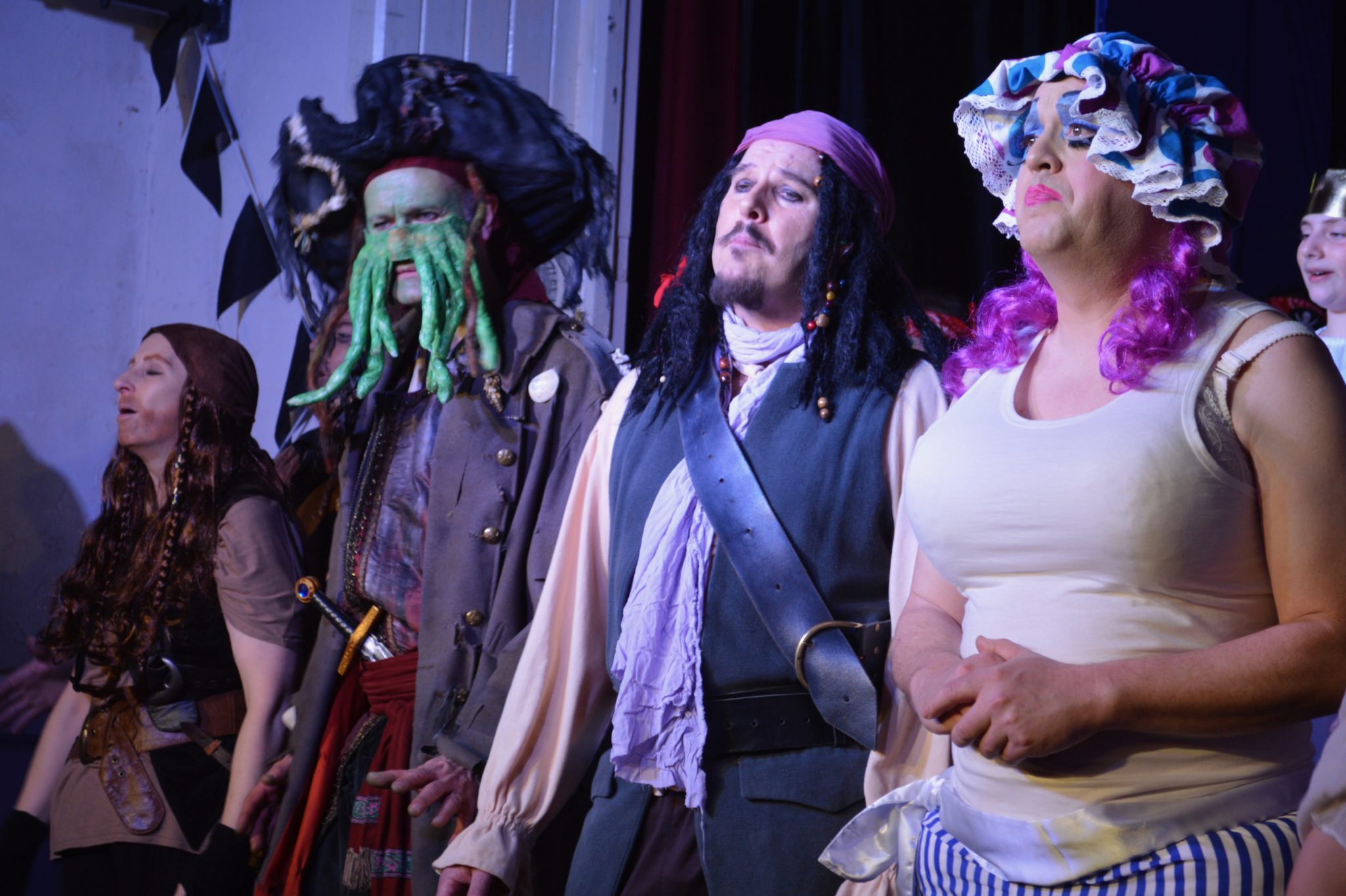 Wookey Theatre Group has pulled off another fantastic show. Setting sail as the ‘Pirates of Panto’ they raised the roof at the village hall.

Pirates of Panto, starring Steve Fench as swashbuckling Captain Zac Sparrow, was panto gold. Steve Collinson made the kids scream as Zac’s nemisis, pirate captain Spongebag Roundpants, scourge of the high seas and Wookey village hall. His tentacle beard, the creation of young special effects make-up artist Ruby Waterman, was a bit too convincing for some of the younger members of the audience.

The lively opening song, performed by the cast to the tune of ‘Everybody’ (Backstreet Boys), set the tone for a fabulous evening’s entertainment. John Carroll’s clever lyrics combined with great song and dance routines are always a highlight. The energy and excitement of the cast launched a fast paced performance packed with laughs.

Scene one opens with Stella Sparrow (Zac’s mum, played by Andy Childs) selling fish in Wells Market Place. Cue lots of fishy jokes. Captain Zac bursts onto the stage brandishing Spongebag Roundpants treasure map. Zac persuades his mum, younger brother Bobby and Squire and Molly Flinders (Rosie Winstone and Gil Oliphant) to embark on a journey to help him find the buried treasure. Molly (a dead ringer for Keira Knightly in Pirates of the Caribbean) would follow Zac anywhere and Bobby reluctantly agrees to go rather than face the wrath of Spongebag alone. Hero Zac is rather miffed to discover Bobby (Louise Cooper) has his own catchphrase, complete with full audience participation. Zac, first rate first mate Bosun Rollicks (Imogen Crees) and their motley prepare for adventure on the high seas.

Next stop Bridgwater Docks, where we meet hilariously hopeless sailors turned pirates, Poop and Deck (brilliantly played by Pete Tincknell and Laura Pearcey). The pair are enlisted by Spongebag to help him capture Zac and the crew of his ship, the Mucky Pearl. As part of the plan a terrified Poop is tasked with chatting up Zac’s mum, Mrs Sparrow. Andy Childs was superb as saucy Stella Sparrow, raising a laugh with the flick of a false eyelash while panicking Poop does his best to fend her off.

Spongebag is not the only one with designs on Zac’s ship. The Harbour Master (Abi Flynn) and Honest John (Jack Pearcey) condemn the Mucky Pearl and then try to sell her back to Zac. Young Jack Pearcey has clearly inherited his mum’s gift for comedy. He gave a brilliant performance as used ship salesman/conman, reeling off watches, phones and ships for sale at a rate of knots: ‘Good choice sir. It comes ready to sail, complete with one year’s free insurance and is fully MOT’d.’ Zac: ‘What does MOT stand for?’ Honest John: ‘Made of Timber’.

All the younger members of the cast put in fantastic performances. Young pirates Skull and Bones (George Pruden and Will Leatt) confidently assisted Spongebag Roundpants with the right amount of swashbuckling swagger. Becky Wiseman was fabulous as disco diva Queen Chaka Khan, who, unwillingly aided by gorgeous Gorbals (Sophie Wiseman and Tamsin French) presides over a dance off between Captain Zac Sparrow and Spongebag Roundpants to decide who gets the gold. Spongebag loses to Zac, despite being the better dancer. The Queen decides to keep him captive to partner her in the Disco Dancing Championships. Zac proposes to Molly and the show ends on a high note with a rousing rendition of Take That’s ‘Get Ready For It’.

Pirates of the Panto was Wookey Theatre Group’s biggest show to date. There were too many cast members to name but all deserve full credit for a very entertaining and professional performance. No pirate panto would be complete without walking the plank and a parrot. The Wookey panto had both. John Carter as Wally the Parrot deserves a special mention for playing it for maximum laughs.

Set and props were ingenious and used to full comic effect. Well done to the Wookey Theatre Group Team – led by director Polly Carroll and producer Ann Gouldney, with the help of set designer Brian Wyatt, theatre manager Ted Jenkins and stunning costumes provided by Jane Casey. One of their best performances yet!