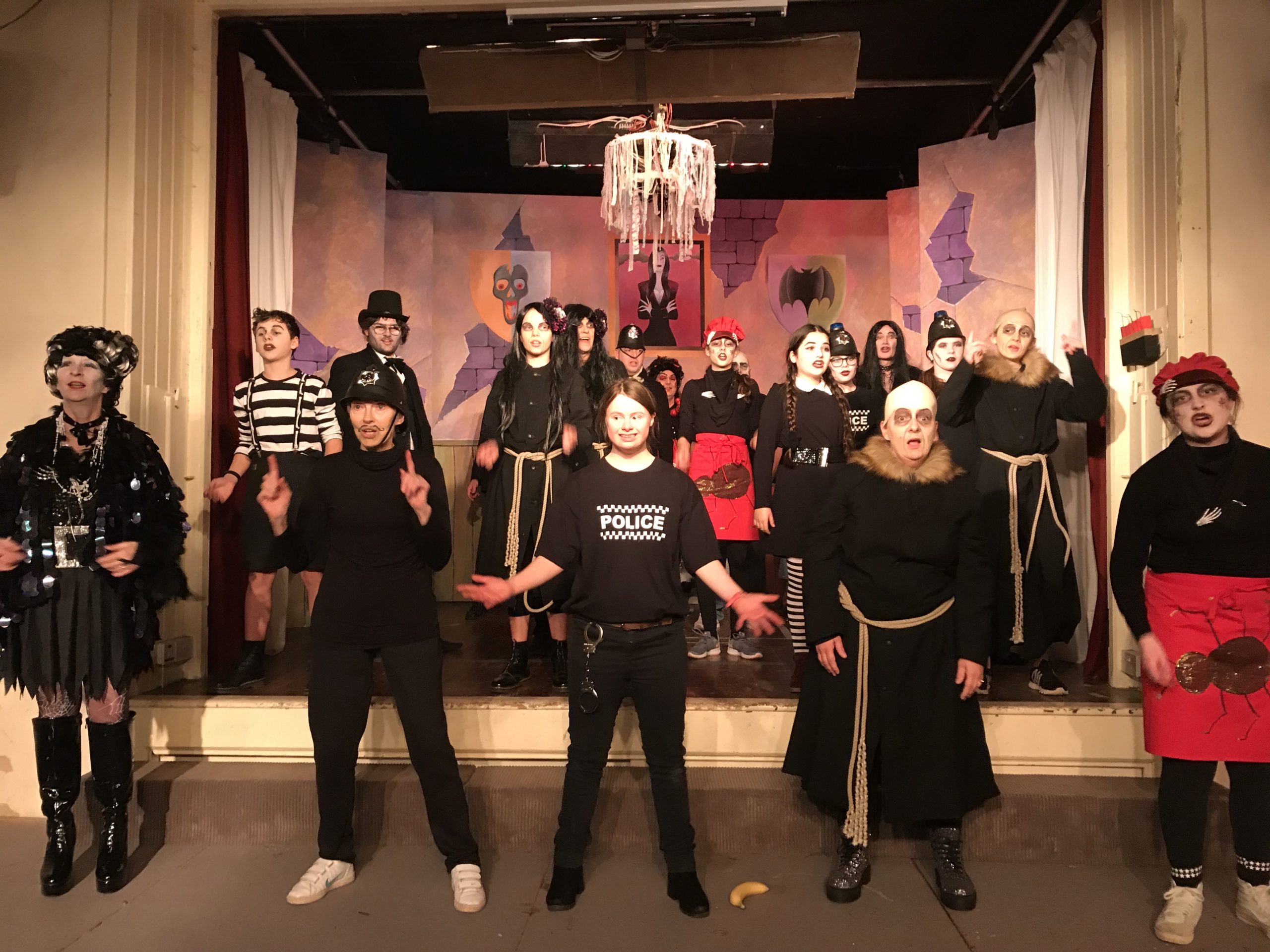 Tickets sold out for the Wookey panto which took the village by storm with six packed performances of The Fladdams Family. Wookey Theatre Group’s spooky satire, inspired by that well–known fictional family of a similar name, opened at Wookey Church Hall on Sunday, 27 January.

Notorious jewel thief Albert Snaffles (Rosie Winstone) and his bumbling accomplice Sidney Sniffles (Andy Childs) arrive on stage to find themselves in the middle of nowhere. “You have reached your destination”, announces Sat Nav (John Carter). Not quite, they are headed for Grimley Manor, on a mission to steal the famous Fladdams family fabulous fandango.

The lady of the house, Mortadella, her husband Ferdinando Fladdams and their household are preparing for a banquet and the arrival of Mortadella’s sister, Pancetta Von Trump and her brood. The Von Trump children troop on stage with blonde comb overs, blue suits and orange faces singing ‘Shiny Normal Children’ to the tune of ‘Shiny Happy People’ and a big laugh from the audience.

What really sets the Wookey panto apart are John Carroll’s highly entertaining song lyrics. You could feel the energy the whole cast put into the song and dance routines. ‘Thriller’ was brilliant. The dance moves, costumes and deadpan faces were spot on – a real highlight.

The Fandango and Thing go missing and it turns out all is not quite as it seems at Grimley Manor. Pete Tincknell – in a red dress and sporting a rather fine pair of Christmas puddings – was a knockout. First as the cook and later when he bursts on stage (to The Sweeney theme tune) to take on Snaffles and Sniffles. He announces himself to be Stella Ripling-tum, head of MI5 and a half, only to reveal moments later that he is in fact the Slightly Pink Panther – also in pursuit of the family jewels.

Steve Collinson was marvellous as leading lady Mortadella, sweet talking her suave husband Ferdy (brilliantly played by Steve French) with Italian, “Vermicelli, matriciana, con funghi…” They made a wonderful couple. Mortadella led the cast for ‘Mold’, to the tune of Spandau Ballet’s ‘Gold’, raising a laugh a line as well as a few eyebrows. Ferdy sang a magnificent version of “Without You”, joined by the rest of the cast, as they mourn the tragic death of Thing (the disembodied hand). “You always had no body except me. Literally…” He made it his own and the audience loved it.

The children were clearly having fun and it was catching. Tilly Bowen was brilliantly mischievous as Thursday Fladdams and sang a beautiful solo. Brother Bugsby Fladdams, played with relish by George Pruden, was a perfect partner in crime and the pair delighted their parents, Mortadella and Ferdy – and the audience – by behaving as badly as possible. The children’s chorus was devilishly good too. All the younger members of the cast gave fantastic performances. The Footmen/Kitchen Hands/Police (Sophia Casey, Ellie Glaysher, Lilly Talbot, Victoria Wakeling, Emily Waterfield, Becky and Sophie Wiseman) were excellent.

Fab four Becky Wiseman, Tilly Bowen, Sophie Wiseman and Hazel Pearcey rocked the stage with Sgt Pepper. The children with the full force of the cast behind them had the audience singing along and cheering to “If Sgt Pepper steals the Fandango…”

Never mind stealing the Fandango, Andy Childs aka ‘PC World’, was in danger of stealing the show, or at least some of the biggest laughs, as the ‘gormless git’ masquerading as a copper turned rapper. Uncle Pesto (Laura Pearcey) was knee tremblingly funny. Her facial expressions made the audience roar with laughter when Thing (John Carroll’s hand – an unexpected star of the show) held her at gun point. No hand joke opportunity was missed and in the words of Mortadella “after quite so many hand puns, now he’s armed and dangerous”.

Anti Pasta (Imogen Crees) and Uncle Pesto are concerned for the safety of their children at the hands of their Fladdams Family cousins, Bugsby and Thursday. This (Hazel Pearcey) and That (Lilly Talbot) are rescued from the little darlings by their mum in the nick of time.

With the Fandango stolen and Thing dead a happy ending looks impossible but Mortadella’s mother Evanora (Louise Cooper) casts a spell which saves the day. Thing comes back to life, the Fandango is returned and Grunch the old butler, played by James Frost with comic genius, reveals himself to be a young man and sweeps Pancetta (Gil Oliphant, or is it Dame Edna?) off her feet.