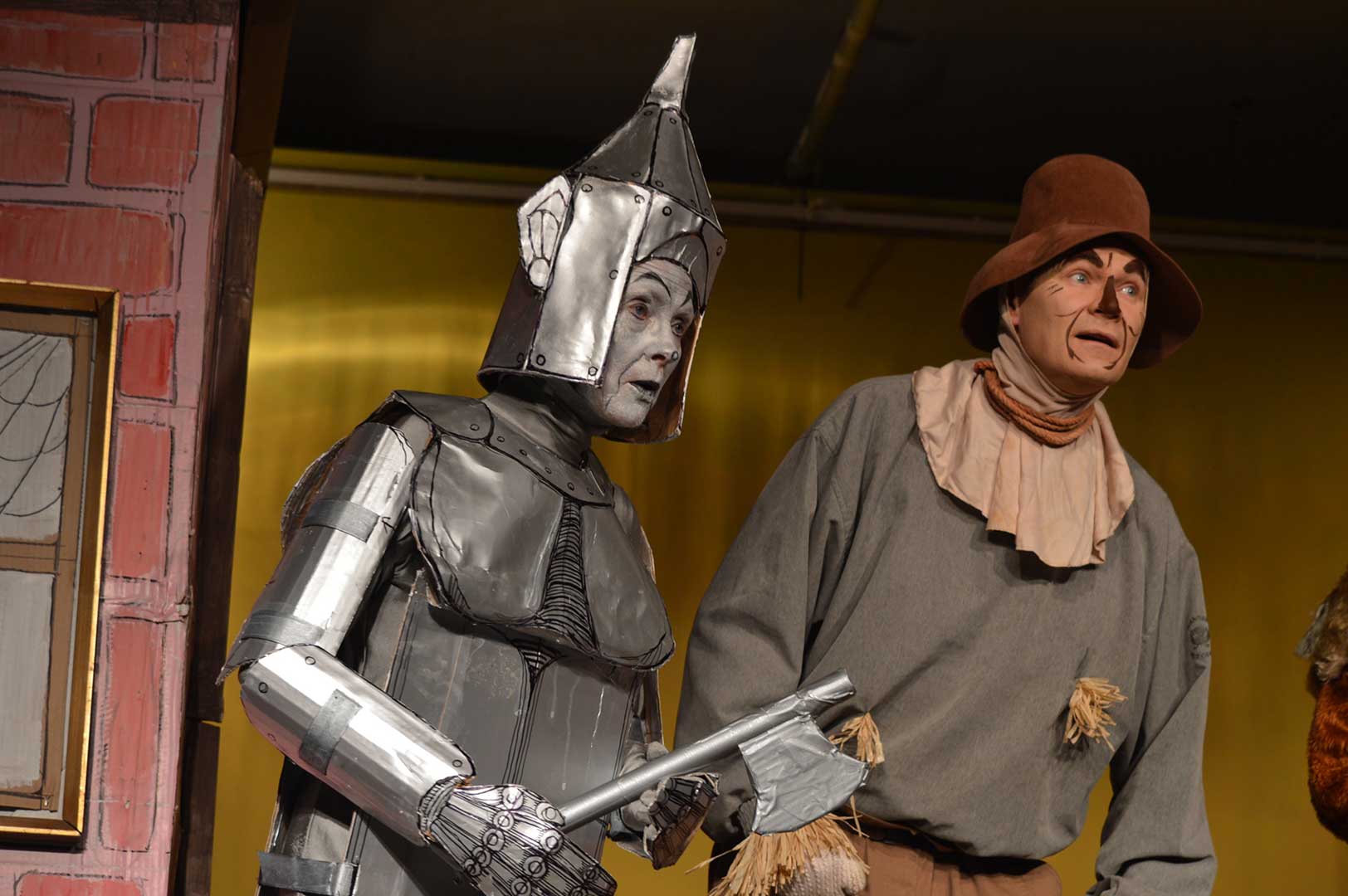 All Round Help – Pete Tincknell

To take on the production and much loved characters of The Wizard of Oz is no small challenge. Wookey Theatre Group rose to it brilliantly, delivering the magic of the original with a fresh helping of its own brand of humour and a few twists and turns in the Yellow Brick Road. Those in the lead roles made them completely their own.

Victoria Wakeling was superb as Dorothy. She sang beautifully and her young shoulders carried off the part of leading lady with a perfect mix of deadpan humour and startled innocence.

The twister hits and we go over the rainbow and arrive in the colourful land of Oz. Enter the good witch of the North and the Munchkins (Tilly Bowen, Sophia Casey, Tamsin French, Nina Jones, Megan Laws, Shannon Laws, Daisy Pruden, George Pruden, Becky Wiseman, Sophie Wiseman and Lucy Wiseman).

‘Ding Dong The Witch is Dead’ and the Munchkin scene celebrating the wicked witch’s demise were spectacular. The singing, choreography, dancing, costumes and energy of the Munchkins made for a fantastic musical number.

Step forward the Lullaby League. The three youngest members of the cast (Tilly Bowen, Daisy Pruden and
Lucy Wiseman) sang sweetly as they introduced themselves, followed by the Lollipop Guild (Ryan Cooper,
Shannon Laws and George Pruden) who matched the Lullaby League’s cuteness with cool and no shortage of attitude. Respect.

Dorothy meets the first of her travelling companions, the Scarecrow, and they set off together in search of
the Wizard, coming across the Tin Man and the Cowardly Lion along the way. Tin Man (Rosie Winstone) was the perfect comic foil to Steve Collinson’s Scarecrow. They both moved brilliantly and were completely convincing, raising lots of laughs on their journey to see “the Great Oz” in their quest for a heart and a brain.

Steve French clearly relished his role as the Lion and played it to the hilt. He rolled with the laughs, which just kept coming. A complete natural, he gave a brilliant comic performance and the audience loved every
minute of it – a roaring success.

Pete Tincknell was scarily good as the Wicked Witch of the West. With a cackle second to none he swooped onto the stage and took it by storm. He was absolutely brilliant as the villain we loved to boo and
hiss. There were plenty of laughs and his acrobatic exit into the cauldron took everyone by surprise! Louise Cooper was great as austere Aunt Em, then made a seamless transition to the Sorceress (good witch of the North), all benevolent and sparkly. She was equally good as the outraged Oz lady giving the Lion a hiding with her parasol after he attempts to scare her.

The Jitterbug scene in the forest was a favourite. Great dancing from the mischievous young Jitterbugs as
they try to divert Dorothy and her pals from the Yellow Brick Road. All the children turned out brilliant performances throughout the show which helped make it a huge success.

When the four friends finish off the Wicked Witch of the West, they head off to see the Wizard. But they have to get past Growlie (James Frost) first. He showed real stage presence and a gift for comedy,

delivering his lines with complete composure to hilarious effect. Jack Carroll gave a very funny performance as both the Mayor and a Private and young Tilly Bowen sang a magnificent solo.

When the Great Oz is finally revealed as a fake we meet a likeable and rather camp would-be wizard, played with a flourish by Gil Oliphant.

The Wizard of Oz is the latest in a string of top notch productions by the award winning Wookey Theatre Group. They are always a great night out.

Director Polly Carroll thanked Tony Pizzey for his wonderful set design and Ted Jenkins for the set construction. She added that Ted, with his enthusiasm and commitment to the community and to Wookey Church Hall, had been an inspiration.

In the last three years Wookey Theatre Group has raised a whopping £8,000 through its performances, which will pay for a new roof for the church hall.

James Frost’s command of the stage was magnificent as the Spirit of the Ring, winning him huge laughs with the raise of an eyebrow and Abominable Snowman (Emily Waterfield) had perfect comic timing. She had the audience “behind her” all the way.

John Carroll’s lyrics and music and fantastic performances by the whole cast combined to make Aladdin another legendary panto from Wookey Theatre Group. The magic carpet ride to Shepton Mallet was an innovative surprise, with film used to great effect. The stunning set was designed by Brian Wyatt and constructed by Bryan Wyatt and Ted Jenkins, and the colourful costumes were the work of wardrobe mistress Jane Casey.

Wookey Theatre Group’s production of Aladdin was directed by Polly Carroll and produced by Ann Gouldney. More than £2500 was raised from the panto and the money will go towards Wookey church hall refurbishments.