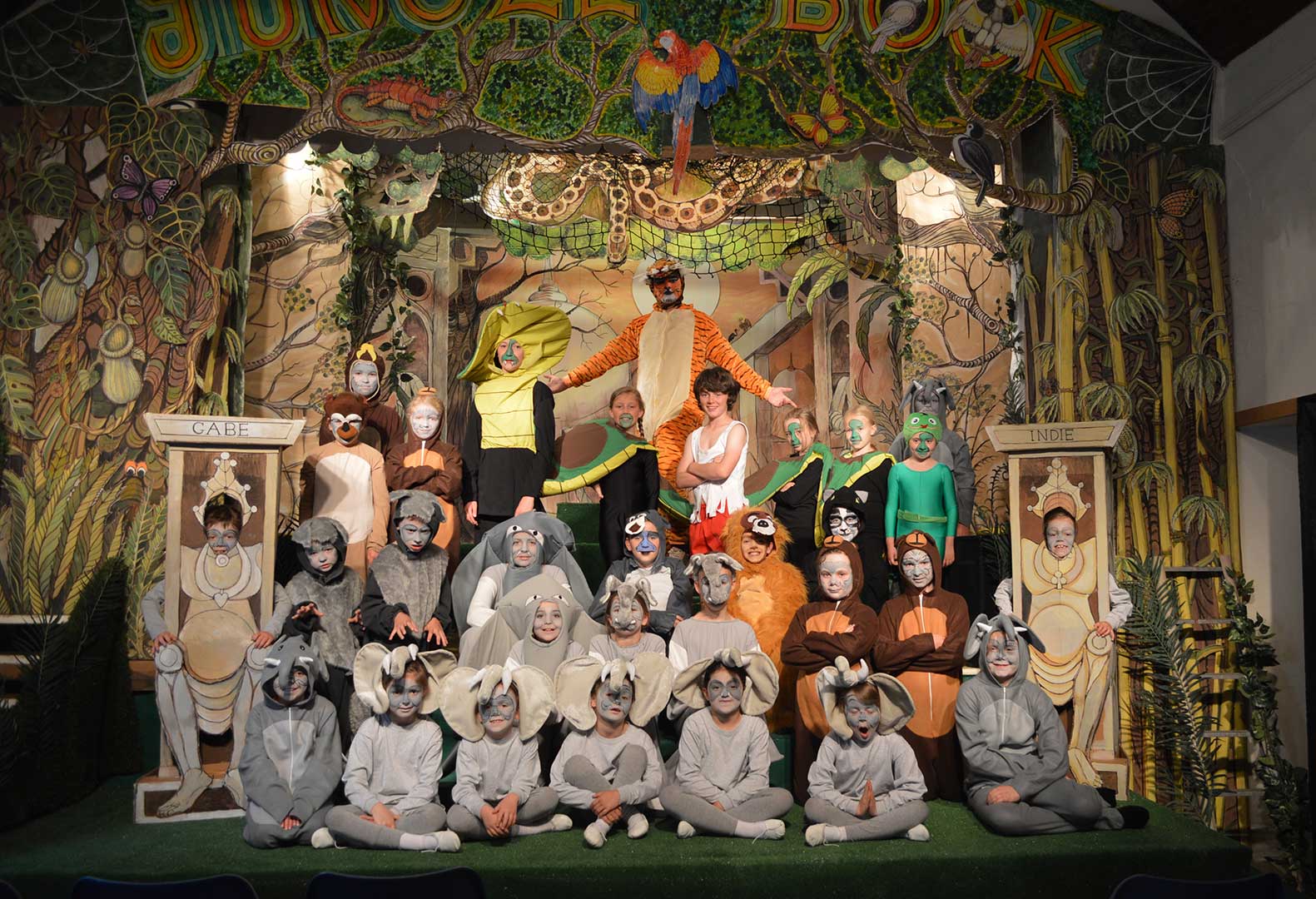 If you missed Wookey Youth Theatre’s production of Jungle Book Kids – you missed out. The cast performed their version of the story of Mowgli to a packed Wookey Church Hall on Wednesday, Friday and Saturday. A stunning set, designed by Tony Pizzey was revealed as the curtain went up. Enter Bagheera the panther, who discovers Mowgli as a baby boy alone in the Jungle.

Sam Stone was brilliant as Mowgli, the plucky boy raised in the jungle by wolves. Ryan Cooper was perfect as laid back Baloo the bear and delivered some great one liners that had the audience roaring with laughter, and made for a superb double act with Victoria Wakeling’s Bagheera, the worried panther taking a much more responsible approach to Mowgli’s welfare.

Jack Carroll shone as King Louis and even managed to pull off a somersault in mid air in his huge, hairy monkey costume. The monkey scenes were one of the highlights of the show, with the cast relishing the chance to act like a pack of wild monkeys, singing and dancing their way through ‘I wanna be like you, ooh, ooh …’ with uncannily realistic monkey moves, noises and an enthusiasm that was infectious. The audience clearly enjoyed it as much as the cast.

Kaa the snake, played by Rowan Wilson, Tamsin French, Ella Wills, Beau Treasure and Daisy Pruden was another highlight, giving a ‘senssational’ performance that had the audience in stitches. The vultures who find Mowgli alone in the jungle were real movers and shakers. They got lots of laughs and sang ‘That’s What Friends Are For’ brilliantly.

Mattie Gray was very good as Colonel Heath the pompous bungling leader of the elephants, marching his herd through the jungle ‘Hup, two, three, four…’ His elephants were fabulous and cute. Beau Treasure sang a beautiful solo as Shanti the girl who mesmerizes Mowgli and effortlessly lures him out of the jungle to the safety of the ‘man village’.

And last but definitely not least, James Frost was excellent as the villain of the piece, sinister Shere Khan the tiger, on the trail of the man cub, cue plenty of booing and hissing.

The show was amazing, with the children giving a wonderful performance, full of energy and fun, which wowed the audience. The singing and dancing was fantastic and the cast’s rendition of ‘Bare Necessities’ brought the house down.

The members of the all child cast were true professionals. Saturday night’s show closed to a standing ovation. Another triumph from the Wookey Youth Theatre production team, led by director Polly Carroll.